PIONIER stands for Precision Integrated-Optics Near-infrared Imaging ExpeRiment. PIONIER is a 4-telescope instrument for the VLTI that combines four ATs or four UTs using an integrated optics combiner. It provides low spectral resolution in H band. PIONIER is designed for imaging with a specific emphasis on precision closure-phases and visibilities. PIONIER has been approved by STC at spring 2009 and first science runs started in October 2010.

In P96 and later, PIONIER is now offered to the whole community as a normal ESO instrument thanks to an agreement between IPAG and ESO. Further information can be found in the ESO webpage for PIONIER. The data reduction software can be found in the JMMC website. Data are automatically reduced by the last version of the pipeline and are made available as calibrated science-ready OIFITS in the JMMC OIDB webpage.

Sample of conference proceedings and other publications:

The instrument is used for a wide range of topics but we particularly focus on the following ones:

PIONIER is funded by the Universit\'e Joseph Fourier (now Universit\'e Grenoble Alpes, UGA), the Institut de Plan\'etologie et d'Astrophysique de Grenoble (IPAG), the Agence Nationale pour la Recherche (ANR-06-BLAN-0421, ANR-10-BLAN-0505, ANR-10-LABX56, ANR-11-LABX-13), and the Institut National des Sciences de l'Univers (INSU PNP and PNPS). Its integrated optics beam combiner is the result of a collaboration between IPAG and CEA-LETI based on CNES R\&T funding, started initially for the VSI project. Wes Traub kindly accepted to ship the IOTA PICNIC camera and optical hardware from PTI to LAOG. The RAPID detector has been developed by the "FUI RAPID", and its installation in PIONIER was supported by the FOCUS LABEX. ESO provides continuous support to the instrument.

PIONIER is on-loan to ESO since March 2015. Therefore it is now the ESO Instrument Operational Team which is in charge of the instrument.

The first results obtained in 2011 include the imaging of the symbiotic binary SS-Lep, the measurement of the size of the recurrent Nova T-Pyx during outburst, the size of the Be star 48-Lib, the detection of the low-mass stellar companion around delta-Aqr...

Since 2012, the main contribution of PIONIER are represented by 3 large programs on:

On each subject the goal is to gather a large sample to allow a breakthrough in our understanding. This is only made possible thanks to the improved sensitivity of PIONIER combined with its excellent operational efficiency. 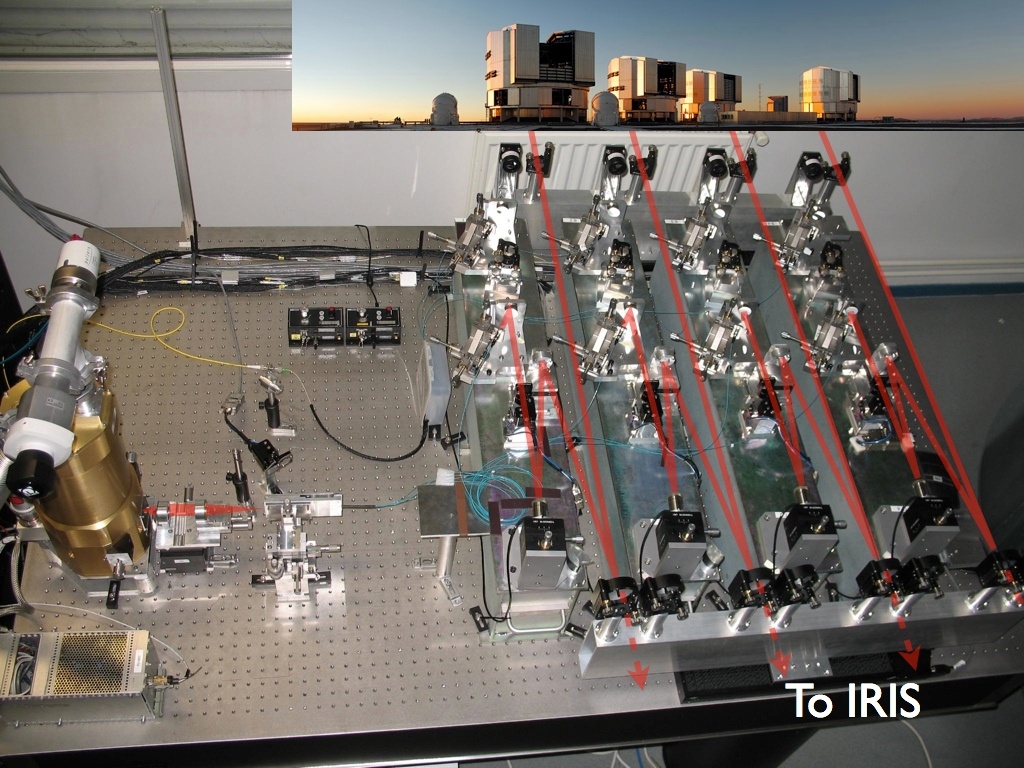 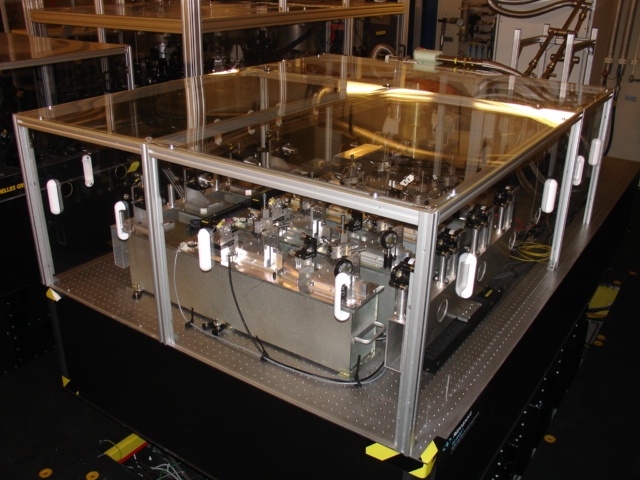 PIONIER has four independent arms that allow the incoming VLTI beams to be injected in fibers. Each arm is equipped tip/tilt and piezo-OPD correction plus shutter. The 4 single-mode fibers guide the light to an integrated optics combiner (IOBC). The IOBC ouput is imaged, through a double doublet + prism onto the detector. The 24 dispersed IOBC outputs are read by the IOTA/IONIC3 PICNIC detector with modified electronics and software.

The alignement units (CAU) allow to 1) to produce coherent beams for internal fringes acquisitions purposes 2) backwards propagate light to ensure alignment to IRIS fast guiding system. One sliding arm with dichroics selects which band (H,K) is forwarded to PIONIER and which one is let through to IRIS. The other sliding arm is used for calibration purposes and has three positions: 1) free: let VLTI beams reach the instrument; 2) mirror: send coherent signal to the instrument; 3) corner-cube: image the input fibers onto IRIS.

The Instrument Software Package is subdivided into the following standard INS software modules: ICS, DCS, OS, MS. Observing templates are executed using the standard ESO BOB tool. Dialog between PIONIER and VLTI (e.g delay lines) is achieved through the VLTI Interferometer Supervisor Software. The architecture has been split into 2 parts; detector system and instrument control system. It is similar to a standard VLTI instrument with an instrument WS, an ICS LCU and a DCS WS, with dedicated tip/tilt and OPD correction facilities. The instrument WS is a standard Linux PC platform supported by the VLT Software. The detector WS is an industrial Linux PC platform equipped with a PCI-7300A board used to generate clock signals and to acquire detector data. It is running under the VLT Software. The instrument LCU is an Embedded PC from BECKHOFF with EtherCAT/fieldbus terminals for I/O. 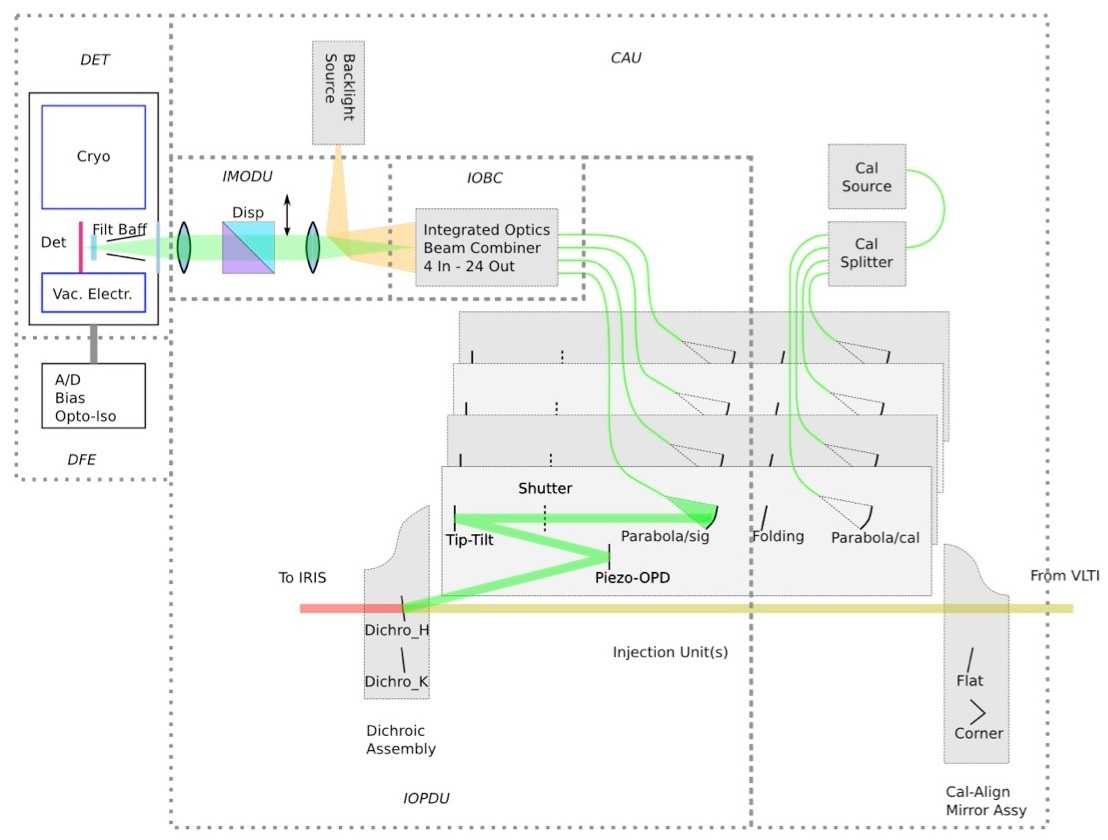 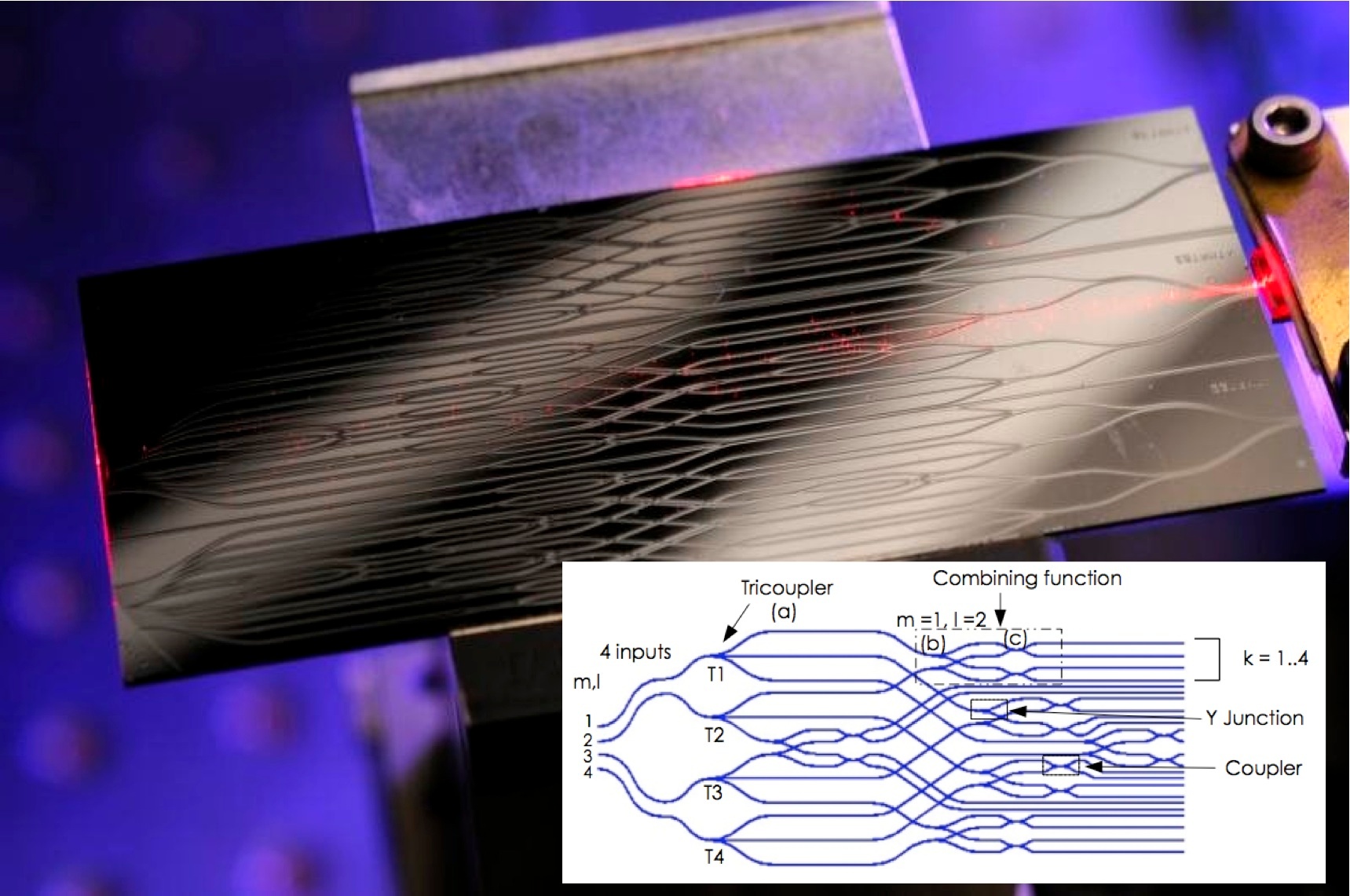 Left: Fig. 2. PIONIER conceptual scheme. The Injection and Optical Delay Unit (IOPDU) is responsible for the injection of the four beams (either from CAU or from VLTI) in the single mode fibers. It also implements the OPD modulation, the tip-tilt correction and the polarization control. The Integrated Optics Beam Combiner (IOBC) recombines the four beams into 24 interferometric outputs in a pairwise scheme. These outputs are then imaged, and eventually spectrally dispersed, by the Imaging Optics and Dispersion Unit (IMODU) on the detector (DET). The aim of the Calibration and Alignment Unit (CAU) is to provide four interferometric beams that match the size and angle of the VLTI beams. Right: Picture of the optical chip and schematic of the IOBC layout realized by CEA-LETI in collaboration with LAOG (contact: pierre.labeye@cea.fr)